Storytimes aren’t just for in the library – take storytime home with you or take it on the road as you travel over the holidays!  Bring along a selection of stories, teach some new rhymes, and sing songs together as a family to entertain your kids while on the road.  And what better theme than a collection of silly, sweet stories about Turkeys? 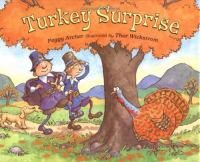 Turkey Surprise by Peggy Archer – JE Archer
“A turkey hides from two brothers looking for food for Thanksgiving Day, and they end up finding something better to eat.” 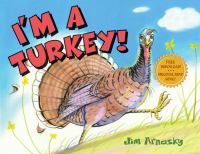 I’m a Turkey by Jim Arnosky – JE Arnosky
“In spoken-word song with rhyming text, a turkey describes his life in a large flock, always looking out for other creatures that might find him tasty.”  Don’t forget to stop by Scholastic’s webpage and download a free mp3 of Jim Arnosky’s companion song, “Talkin’ Turkey.” 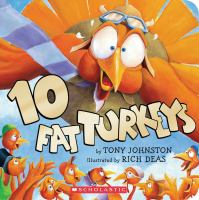 10 Fat Turkeys by Tony Johnston – JE Johnston
“Girls and boys will gobble up this hilarious counting story about ten goofy turkeys roller-skating on a fence, doing a noodle dance, and more! Give thanks! This Thanksgiving favourite is now available as a board book with foil cover.” 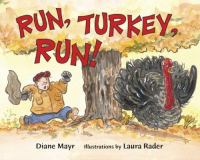 Run, Turkey, Run! by Diane Mayr – JE Mayr
“The day before Thanksgiving, Turkey tries to disguise himself as other animals in order to avoid being caught by the farmer.”

Descriptions in quotation marks are provided by publishers.

These books, and many more, are available at the Handley Regional Library.

Albuquerque is a turkey
and he’s feathered and he’s fine.
And he wobbles and he gobbles
and he’s absolutely mine.

He’s the best pet you can get,
yet better than a dog or cat.
He’s my Albuquerque turkey;
and I’m very proud of that.

Albuquerque is a turkey,
and he’s happy in his bed.
‘Cause for our Thanksgiving dinner
We’ll have pizza pie instead!

Turkey and Stuffing (Tune of “Where is Thumbkin”)

Turkey and stuffing,
Turkey and Stuffing,
Pumpkin pie.
Ten feet high!
We were so much thinner,
Before we ate our dinner.
Me-oh-my!
Me-oh-my!

Check the calendar for storytime schedules at the Handley and Clarke County Libraries and for special events throughout the system.